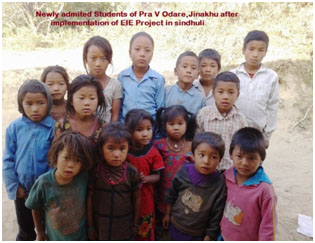 Dear reader, Greetings, My name is Sita Kumari Devkota, I work for Sahakarya Nepal, Sindhuli as an Social mobilisers since April 2016, this is a case story of Sindhuli District, Central Region of Nepal. As we all believe that school is a holy place where education sustains to build several lives. Education means a lot in everyone’s life as it facilitates our learning, knowledge and skill. It completely changes our mind and personality and helps us to attain the positive attitudes. We must give importance to the education than other targets in life as it is the only source of real happiness in our life.

Since E.I.E Project launched in Sindhuli district, I was responsible to involve in social mobilisation         aspect of E.I.E project in Ambote & Jinakhu VDC. During my visit to schools of those Vdc’s, I suddenly saw some children’s playing on ground with some livestock Grazing around, I interact with those children’s and asked few questions about them and education, they said “VUICHAILO LE PADAI TA SAKIYOO”(our education has ended with earthquake)  I found that they left going school since earthquake, one of the children say’s that their school & home has collapsed & they had a lot of home works to support their parents, I was speechless assuming their situation & asked their School Name & home address too. I determined to make them to go to school.

Firstly I went to their school Pra V Odare, Jinakhu and talked with school Vice Principal Mr. Netra Kumar Paudel & tried to find out no. of students who stopped coming school after that disaster, spending some time in school administration I found that few students were stopped & irregular in daily school activities. Secondly I list out those name & address lists, & went to those address. I spend 2-3 hrs in each home talked & tried to mitigate their difficulties (verbally) & encouraged them to send their children to school, specially focusing on essence of education in human Life.

While going through this I finally reached home of those children that I’ve found previously playing in ground, they were surprised to see me, I asked their well-being and asked to call their parents. As their Parents came ‘I greeted them ‘ & make them comfortable to talk ,While making some interaction about essence of education in human life mainly focus to educate their children. They said ,”K garnu Dukha cha ,afu Le ta Padna Sakiyena eniharu lai Chai padaunu parla“( Speaks relating poverty ” Although we didn’t study we will teach our childrens educate them well), Finally they agreed to send their children & asked me to make some effort to admit their children, I asked those children that do they want to go to school or not. They said YES (smiling) & asked them to come to school tomorrow. The next day I went to Pra V Odare, school & made some effort for admission. Those children says good bye to me (smiling). this was a good feeling to me personally I feel satisfied doing this.

After having some informal conversation with school representative, I asked Mrs. Mangalu Tamang (Principal)

about school environment & current status, She said “everything is going well”. She quickly mentioned that UNICEF kits Materials (ECD, Recreation, and School in box & Story bag) distribution for students/children’s of our school leads to teach & learn faster, regular students attendance, and was no. of increase in new admissions. She says that “Our students are excited to get those materials with orientation on its benefits & using procedures.” I asked her for some names that are recently admitted relating this, She says few names , Sakuntala Moktan ,Anita Moktan, Sanjib Moktan, Nain singh Ghising,Kailash Pakhrin ,Sabin pakhrin ,Ram Kumar Ghising & prem kumari Moktan which were admitted after our initiation to “Back to school” event under  EIE Project. 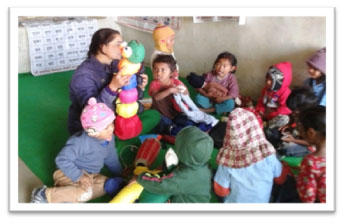 She also thanked UNICEF, FCA, Sahakarya Nepal for these attention to build school & to provide materials which makes them more Capable, happy & expected to continue their support in children’s education.

Finally I said you’ve forgotten me to thank(laughing),She said (laughing) you are the most special person to thank ,(being emotional)Thank You so much for your effort in this school & sharing “REAL HAPPINESS OF HUMAN LIFE”, I wish I could make you stay in this school as our staff.( laughing continues)(Both)